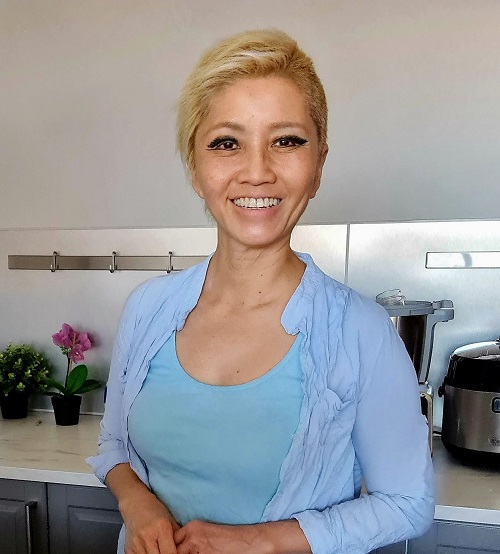 Her no-holds barred approach to Malaysian cooking, along with her 20+ years of experience as a professional cook, has made Jackie a household name among lovers of Malaysian food, and seen her regularly featured on television and mainstream media for her expertise on the topic.

Known for her platinum pixie-cut and no-nonsense attitude, Jackie gave up her IT career as a Microsoft Systems Engineer and Cisco Network Associate in 2001 to continue her parents’ hawker legacy through running pop-up market stalls all over Sydney, culminating in her popular restaurant in the inner west suburb of Concord in 2006.

Jackie is a proud sole parent to Noah, who was born with Down Syndrome and a number of life-threatening conditions that saw him spend the first 7 months of his life in hospital.

On Noah’s discharge from hospital in 2013, Jackie made the decision to close her restaurant in order to take care of him, so she pivoted her brand from food sales to online content creation.

In the process, she grew her following to 1.9 million worldwide at its peak and earned herself the ranking and recognition as one of the most influential Australian chefs on social media.

Food Fame is the digital and branding agency behind Masters of Malaysian Cuisine, and MSFA is an online coaching community with a mission to train up 1000 passionate cooks in order to preserve Malaysia’s hawker tradition for future generations.

More about Jackie M. can be found at www.JackieM.com.au