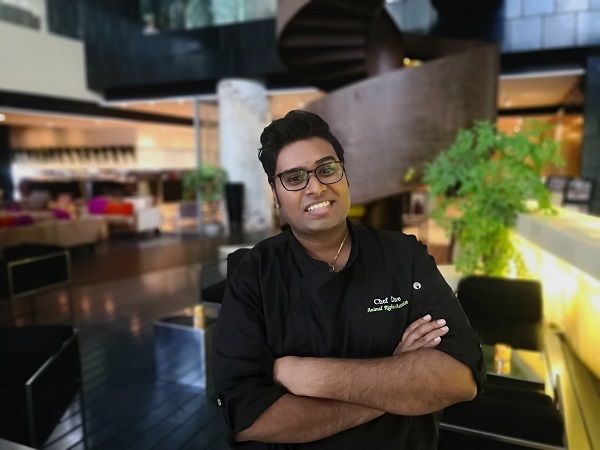 Dave Murugaya began his culinary career with the prestigious Shangri-La Group of Hotels in Malaysia, before travelling the world with Disney Cruise Line as a Western cuisine chef. When the Covid-19 pandemic hit and cruises were suspended, Dave lost his job along with countless others.

Instead of feeling sorry for himself, Dave decided to share his new journey towards veganism with the world. He created a YouTube account, and over the course of 30 days, he uploaded a new video every day, shooting and editing each one on his mobile phone. Frustrated that he had “only” managed to gain 1000 subscribers in his first month, Dave printed 1000 flyers introducing himself and inviting people to sign up to his YouTube channel.

He then personally distributed them by leaving them under his neighbours’ doors. Unbeknownst to Dave, one of them happened to have a large online following; she shared a snapshot of his flyer on Twitter, and the rest is history – it received thousands of retweets, and Dave gained over 10,000 new subscribers overnight thanks to his perseverance and positive attitude.

Since then, Dave has received widespread media attention in Malaysia, and his videos have endeared him to his followers, both for his cooking skills and for his capacity to seamlessly transition across 4 languages (Tamil, Malay, Mandarin and English).

Chef Dave’s mission is to veganise all traditional Malaysian food so that vegans can enjoy the flavours of the food of his heritage, and like him, come to see that being vegan is not a sacrifice, but a joy.